Just spoke with the Vet. Tino is coming out of anesthesia and doing okay. The surgery was "difficult" because he's so small (5 1/2 pounds) and quite a few of the gall stones had lodged themselves in his urethra. One stone was large enough to have stopped his urinary flow if left unchecked, so we got to it in time. He's nine years old. This was his second gall stone surgery--last one was in July of 2016. He has a genetic  disposition to develop them. So the good news is, we still have him for however long we have.
Now if I can only learn a defense to the Russian Wolfhound Gambit he's so fond of, I might beat him at chess some day. 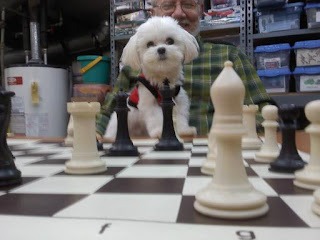 Charles Freedom Long
ABOUT THE AUTHOR I write Speculative Fiction about what might be. Psionics, aliens and other worlds, awareness and ongoing communication between the living and the dead as a fact of daily life, and how that might affect the life and philosophy of a world.